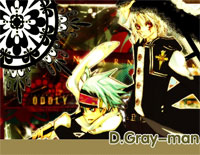 Road Kamelot's Song was an episode song of D.Gray-Man. D.Gray-man (ディー・グレイマン Dī Gureiman) is a Japanese manga series written and illustrated by Katsura Hoshino. The series tells the story of a boy named Allen Walker, a member of an organization of Exorcists who makes use of an ancient substance called Innocence to combat the Millennium Earl and his demonic army of akuma.

Road Kamelot's Song was composed by Kaoru Wada, a Japanese music composer, music arranger, conductor, music orchestrator and pianist from Shimonoseki,Yamaguchi Prefecture. He studied at the Tokyo College of Music.