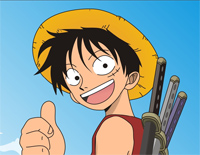 We are! was used as opening theme for One Piece. One Piece (ワンピース Wan Pīsu) is a Japanese shounen manga series written and illustrated by Eiichiro Oda. It has been serialized in Weekly Shōnen Jump since August 4, 1997; the individual chapters are being published in tankōbon volumes by Shueisha, with the first released on December 24, 1997, and the 71st volume released as of August 2013. One Piece follows the adventures of Monkey D. Luffy, a young boy whose body gains the properties of rubber after unintentionally eating a Devil Fruit, and his diverse crew of pirates, named the Straw Hat Pirates. Luffy explores the ocean in search of the world's ultimate treasure known as One Piece in order to become the next Pirate King.

And We are! was sung by Hiroshi Kitadani. Hiroshi Kitadani (きただに ひろし Kitadani Hiroshi, Kanji 北谷 洋, born August 24, 1968) is a Japanese anison vocalist, who primarily performs theme songs and other songs in anime. He also works behind the scenes of many songs. He currently works with JAM Project.

We are! is well known by people and if you like it, you can also download free We are! sheet music here. Just Enjoy It!