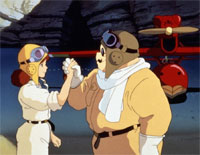 Free The Bygone Days piano sheet music is provided for you. So if you like it, just download it here. Enjoy It!

The Bygone Days
is used as an original soundtrack for Porco Rosso, which is a 1992 Japanese animated adventure film written and directed by Hayao Miyazaki. The film stars the voices of Shūichirō Moriyama, Tokiko Kato, Akemi Okamura and Akio Ōtsuka. Toshio Suzuki produced the film for Studio Ghibli. Joe Hisaishi composed the music.

And The Bygone Days is composed by Joe Hisaishi, a composer and musical director known for over 100 film scores and solo albums dating back to 1981.