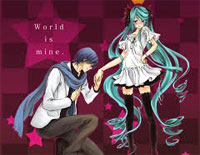 And actually World is Mine was firstly created on MAY 20, 2008 and included in the album, Supercell.

Free World is Mine sheet music
is provided for you. So if you like it, just download it here. Enjoy It!