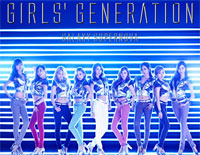 Free Galaxy Supernova sheet music is provided for you. So if you like it, just download it here. Enjoy It!


Galaxy Supernova is the eighth Japanese single by South Korean girl group Girls' Generation. It was released on September 18, 2013 in Japan. After being on top of the Tower Record's pre-order chart, the single landed fourth on the Japanese Oricon Daily Singles Chart a day prior to its official release day and topped the chart afterwards.


The video begins in silence with the girls lining up in colored denim, which is reminiscent of the music video for "Gee" music video, and also features the girls wearing metallic and futuristic-looking dresses while dancing in a box set with LED lights serving as the background and two walls. The group also reuses the "arrow dance" from previous video "Hoot" in the first chorus.