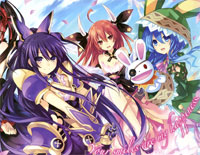 Free Date A Live sheet music is provided for you. So if you like it, just download it here. Enjoy It!

Date A Live
is the opening theme of Date A Live. Date A Live is a Japanese light novel series written by Kōshi Tachibana and illustrated by Tsunako. An anime adaptation series aired on TV from April 6 to June 22, 2013. Each episode was streamed in lower quality on Niconico a week before its TV premiere. Following the end of the first season, a second season was announced.