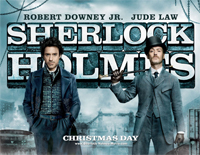 Free Discombobulate piano sheet music is provided for you. So if you like it, just download it here. Enjoy It!

Discombobulate
is an orginal soundtrack to the 2009 film Sherlock Holmes. Sherlock Holmes is a British–American action mystery film based on the character of the same name created by Sir Arthur Conan Doyle. The film was directed by Guy Ritchie and produced by Joel Silver, Lionel Wigram, Susan Downey and Dan Lin. The screenplay by Michael Robert Johnson, Anthony Peckham and Simon Kinberg was developed from a story by Lionel Wigram and Michael Robert Johnson. Robert Downey, Jr. and Jude Law portray Sherlock Holmes and Dr. John Watson respectively. In the film, Holmes and his companion Watson, with aid from former adversary Irene Adler, investigate a series of murders connected to occult rituals. Mark Strong plays the villain Lord Blackwood, who has somehow returned after his execution with a plot to take over the British Empire using an arsenal of dark arts and new technologies.

And Discombobulate was composed by Hans Zimmer, a German film composer and music producer. He has composed music for over 100 films.