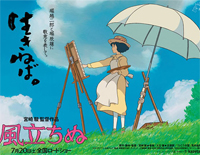 Free Journey (Dream Of Flight) piano sheet music is provided for you. So if you like it, just download it here. Enjoy It!

Journey (Dream Of Flight) is an original soundtrack of The Wind Rises, a 2013 Japanese animated historical fantasy film. This film was written and directed by Hayao Miyazaki, and adapted from his own manga of the same name which was loosely based on the short story The Wind Has Risen by Tatsuo Hori, a writer, poet and translator from mid-20th century (Showa period) Japan. Kaze Tachinu is a fictionalised biography of Jiro Horikoshi, designer of the Mitsubishi A5M (featured in the movie) and its famous successor, the Mitsubishi A6M Zero. Both aircraft were used by the Empire of Japan during World War II.

Journey (Dream Of Flight) was composed by Joe Hisaishi, a composer and director known for over 100 film scores and solo albums dating back to 1981.