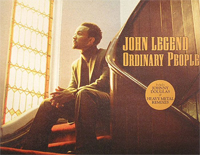 Free Ordinary People piano sheet music is provided for you. So if you like it, just download it here. Enjoy It!

Ordinary People
is a song by American recording artist John Legend. It was written and produced by Legend and will.i.am for his debut album Get Lifted (2004). It was released as the album's second single and later certified gold by the RIAA. Critics were positive towards the song, praising it for its raw emotion and simplicity. "Ordinary People" won the Grammy Award for Best Male R&B Vocal Performance.

The video for Ordinary People features Legend playing a grand piano in an all-white space, while couples and families of varying ethnic backgrounds fight and reconcile around and in front of the piano. For the final minute of the video, Legend is joined by a string section and (audibly) a harmonica. Legend walks to and from the piano with a glass of water, as a short bookending to the video proper.

The Lyrics of Ordinary People:

Girl, I'm in love with you
This ain't the honeymoon
Passed the infatuation phase
Right in the thick of love
At times we get sick of love
Seems like we argue everyday
I know I misbehaved and you made your mistakes
And we both still got room left to grow
And though love sometimes hurts
I still put you first
And we'll make this thing work but I think we should take it slow
We're just ordinary people
We don't know which way to go
Cause we're ordinary people
Maybe we should take it slow
Take it slow, ohh
This time we'll take it slow
Take it slow, ohh
This time we'll take it slow
This ain't a movie no
No fairytale conclusion y'all
It gets more confusing everyday
Sometimes it's heavensent
Then we head back to hell again
We kiss then we make up on the way
I hang up, you call
We rise and we fall
And we feel like just walking away
As all of the banses we take second chances
Though it's not a fantasy I still want you to stay
Maybe we'll live and learn
Maybe we'll crash and burn
Maybe you'll stay
Maybe you'll leave
Maybe you'll return
Maybe we'll never fight
Maybe we won't survive
Maybe we'll grow, we'll never know
Baby you and I