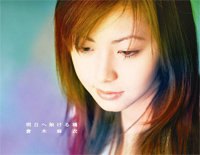 Ashita e Kakeru Hashi
is Mai Kuraki's 18th single, released on May 19, 2004. Mai Kuraki is a Japanese pop and R&Bsinger-songwriter and producer from Funabashi, Chiba. Kuraki debuted in 1999 with the single, "Love, Day After Tomorrow". In 2000, she released her debut album, Delicious Way, which debuted at number-one and sold over 2,210,000 copies in its first week. Kuraki is one of a few female artists in Japan to have their first four studio albums to debut at top of the Oricon album chart.


Free Ashita e Kakeru Hashi piano sheet music is provided for you. So if you like it, just download it here. Enjoy It!