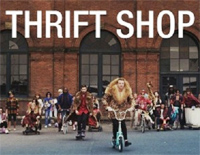 Free Thrift Shop piano sheet music is provided for you. So if you like it, just download it here. Enjoy It!

Thrift Shop
is a song by American hip hop duo Macklemore & Ryan Lewis. It was released on August 27, 2012 as Macklemore's eighth single on career and as the fifth single from their debut studio album The Heist (2012). It features vocals from Wanz. The song was composed to show Macklemore's esteem for thrift shops and saving money, opposing the flaunting many rappers display. Music reviewers praised the song for its humorous lyrics and social critique.

Despite being released on Macklemore's independent label with distribution by ADA, Thrift Shop was a sleeper hit. It peaked at number one on the Billboard Hot 100 and has since sold over 7 million copies in the US alone. The song also reached number one in the United Kingdom, Ireland, Canada, France, Denmark, Netherlands, Australia and New Zealand. A music video was released to accompany the song's release on August 29, 2012. It was used in the trailers for the filmsPain & Gain and The Internship. Furthermore, the video has garnered more than 475 million views on YouTube, and it is the site's 13th most watched video.

The Lyrics of Thrift Shop: