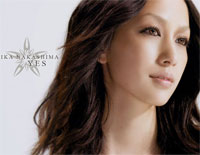 Free Glamorous Sky piano sheet music is provided for you. So if you like it, just download it here. Enjoy It!

Glamorous Sky
is Mika Nakashima's 16th single overall, her 1st under the name Nana starring Mika Nakashima, and the second most successful single in her career after "Stars". It is her first rock song and it was used as one of the image songs for the film Nana (as one of the bands Black Stones' song).

Hyde of L'Arc-en-Ciel composed "Glamorous Sky", while Yazawa Ai wrote the lyrics. The second and third B-sides, "Blood" and "Isolation" were used as CM songs for Katecosmetics. Mika Nakashima graces the cover of the single as Nana Osaki. The song is featured as a cover by a jrock band, Girugamesh, in the Konami music games, BEMANI for Drummania V3 and Guitarfreaks V3, as well as the iNiS rhythm game Moero! Nekketsu Rhythm Damashii Osu! Tatakae! Ouendan 2.