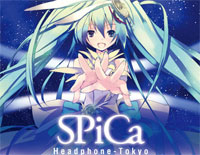 Free SPiCa piano sheet music is provided for you. So if you like it, just download it here. Enjoy It!

SPiCa
is a song performed by Hatsune Miku and depicts Miku as the Star of the Night sky, forever watching and loving us from above. She also travels each passing night, forever watching over us, looking over us; she sings her sorrow of saying goodbye as the sun rises, as each day holds a bright star that can't be seen.

The meaning behind the song is debatable, and many interpretations arise from each action in the song.