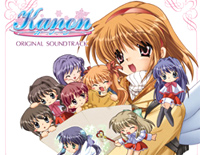 Free Kaze o Matta Hi piano sheet music is provided for you. So if you like it, just download it here. Enjoy It!

Kaze o Matta Hi
is a background music of the game, Kanon. Kanon (カノン) is a Japanese adult visual novel developed by Key released on June 4, 1999 for Windows PCs. Key later released versions of Kanon without the erotic content, and the game was ported to the Dreamcast, PlayStation 2 and PlayStation Portable. The story follows the life of Yuichi Aizawa, a high school student who returns to a city he last visited seven years prior, and he has little recollection of the events from back then. He meets several girls and slowly regains his lost memories. The gameplay in Kanon follows a branching plot line which offers pre-determined scenarios with courses of interaction, and focuses on the appeal of the five female main characters by the player character. The game once ranked as the second best-selling PC game sold in Japan, and charted in the national top 50 several more times afterwards. Kanon has sold over 300,000 units across several platforms.

And Kaze o Matta Hi was composed by Shinji Orito who is a Japanese musical composer originally from Hyōgo, Japanworking for the software company Key.