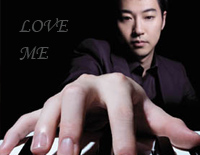 Free Love Me piano sheet music is provided for you. So if you like it, just download it here. Enjoy It!

Love Me
is a music by Yiruma, a pianist and composer from South Korea. Yiruma frequently performs at sold-out concerts in Asia, Europe and North America. His alma mater, King's College London, England helped him gain European popularity and recognition. Among his most popular pieces are "River Flows in You", "Kiss the Rain" and "May Be". Yiruma's most popular album, First Love, was released in 2001.

He began playing the piano at the age of five and moved to London when he was eleven, in 1988, to study at The Purcell School of Music. He held dual citizenship, South Korean and British, until 2006, when he gave up his UK citizenship to serve in the South Korean Navy.

And Love Me was included in his live album, 2005 Yiruma: Live at HOAM Art Hall. Released on July 12, 2005, this album includes the recordings for many of his sold out concerts performed at HOAM Art Hall. This album contains Yiruma's performances during 2003-2004 tours, his sold out solo concerts, and charitable school concerts. Yiruma performed pieces from his albums:'Love Scene', 'First Love', 'From the Yellow Room', 'Oasis & Yiruma', and 'Doggy Poo OST'.