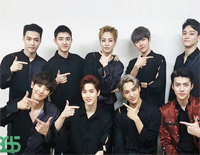 Free 3.6.5 piano sheet music is provided for you. So if you like it, just download it here. Enjoy It!

3.6.5
is a K-Pop/Mandopop song performed by the South Korean-Chinese artist idol group Exo. Available in both Korean and Mandarin Chinese, the song was included in their first studio album XOXO which was digitally released on June 3, 2013 under the record label of S.M. Entertainment.

3.6.5
was one of the three songs from XOXO (others being "Wolf" and "Growl") that were heavily promoted in 2013, both domestically and overseas.