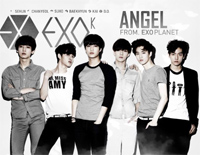 Free Angel(Into Your World) piano sheet music is provided for you. So if you like it, just download it here. Enjoy It!

Angel(Into Your World)
is a song by Chinese-South Korean boy bands Exo-K and Exo-M, from their debut record MAMA. The track was issued to South Korean and Mandarin radio stations to bring awareness to Exo's debut.

Angel
was composed by Hyuk Shin, DK and Sasha Hamilton and arranged by Hyuk Shin and Sasha Hamilton. J. Lewis provided vocals on the demo version that was sent to various record labels before South Korean entertainment company SM Entertainment obtained the rights to the song. The final version removed the original English lyrics and were replaced by Korean lyrics (composed by Yoon-Gyeong Jo) and Mandarin lyrics (composed by Michie and Liu Yuan). The song was released by both sub-groups of Exo (Exo-K and Exo-M) on their EP "Mama", under the names of Angel for the Korean version, and 你的世界 (Angel) for the mandarin version.