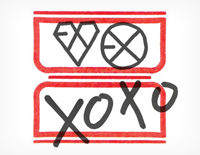 Free XOXO piano sheet music is provided for you. So if you like it, just download it here. Enjoy It!

XOXO
is a song by South Korean-Chinese boy band EXO. Formed in 2011 in Seoul, South Korea, Exo comprises twelve members separated into two subgroups,Exo-K and Exo-M, performing music in Korean and Mandarin, respectively. Their name was taken from exoplanet, a term referring to planets outside of the Solar System.

And XOXO was included in their album, XOXO Repackage Hug Ver.

XOXO (Kiss&Hug) is the first studio album by South Korean-Chinese boy band Exo, released on June 3, 2013 by S.M. Entertainment. The album is a follow-up to the group's debut EP, Mama (2012). Like all of the group's music, the album was released in two versions – a Korean "Kiss" edition and a Chinese "Hug" edition.