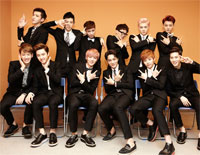 Free History piano sheet music is provided for you. So if you like it, just download it here. Enjoy It!

History
is a song by Chinese-South Korean boy bands Exo-K and Exo-M. It served as their second "prologue" single from their debut record Mama (2012). Available in both Korean and Mandarin, the song was digitally released on March 9, 2012, by S.M. Entertainment.

Two music videos for "History" were released on YouTube on March 8, 2012 through S.M. Entertainment's official channel, SMTOWN. Each music video, though recorded in two different versions, featured all twelve members of Exo. The music videos features the two groups dancing in a windy, rocky setting and a bright blue studio.