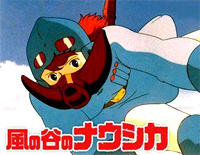 The Valley of the Wind (風の谷) is one of esipodes of Nausicaä of the Valley of the Wind (Japanese: 風の谷のナウシカ Hepburn: Kaze no Tani no Naushika) which is a manga written and illustrated by anime director Hayao Miyazaki. It was serialized intermittently from 1982 to 1994 in Japan, and the English translation is published by Viz Media. It tells the story of Nausica?, a princess of a small kingdom on a post-apocalyptic Earth who becomes involved in a war between kingdoms while an environmental disaster threatens the survival of humankind. On her journey, she struggles to bring about a peaceful coexistence among the people of her world, as well as between humanity and nature.