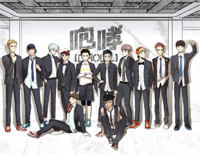 Free Growl piano sheet music is provided for you below and if you like it, just save its picture on your computer.


Growl (Korean: 으르렁; Chinese: 咆哮) is a song recorded by South Korean-Chinese boy band Exo. Available in both Korean and Mandarin, the song is a follow-up single for the repackaged version of the band's first studio album, XOXO. Its two music videos were unveiled via YouTube on August 1, 2013, 12:00AM KST.


Composed by Hyuk Shin, DK, Jordan Kyle, John Major, and Jarah Gibson, "Growl" is a dance-pop song with contemporary R&B and funk influences. Inspired by the lyrics of the group's previous promotional single "Wolf", the lyrics of "Growl" are about the male protagonist, personified as a wolf, "growling" at another wolf who intends to pursue the protagonist's girlfriend.