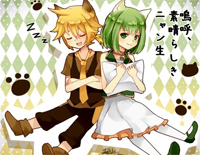 Free Invisible piano sheet music is provided for you. So if you like it, just download it here. Enjoy It!

Invisible
is a song performed by Kagamine Rin & GUMI. Kagamine Rin & Len (鏡音リン ・レン) are Japanese VOCALOIDs developed and distributed by Crypton Future Media, Inc., and were initially released in December 2007 for theVOCALOID2 engine. GUMI (グミ) is a Japanese VOCALOID developed and distributed by Internet Co., Ltd.. as Megpoid (メグッポイド), and was initially released June 2009 for the VOCALOID2 engine.

And Invisible is kemu's second original song. It's his first song to have entered the Hall of Legend on niconico.