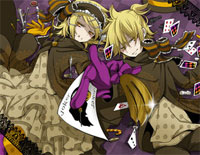 Free Trick and Treat piano sheet music is provided for you. So if you like it, just download it here. Enjoy It!

Trick and Treat is OSTER project's first work using Kagamine Rin & Kagamine Len (duet, not individual) in a song. The song was uploaded for Halloween. OSTER project's style is usually "cheerful" and "colorful", though trick and treat was her first work to be "dark". trick and treat reached 1 million views on November 21, 2011; making it the second Kagamine duet song ("Gekokujou" being the first song) to do so.

Trick and Treat basically tells of a story of "you" who were led by Rin and Len to a deep, deep forest. Although they seemed friendly at first, "you" realized things were not as they seemed.

This song is featured on the albums Cinnamon Philosophy, EXIT TUNES PRESENTS STARDOM, and OSTERさんのベスト.