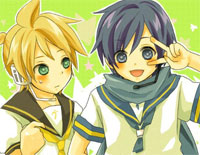 Free Magical☆Nuko Len Len piano sheet music is provided for you. So if you like it, just download it here. Enjoy It!

Magical☆Nuko Len Len is a song performed by Kagamine Len. Kagamine Rin & Len (鏡音リン ・レン) are Japanese VOCALOIDs developed and distributed by Crypton Future Media, Inc., and were initially released in December 2007 for theVOCALOID2 engine. They are part of the Character Vocal Seriesand are both Character Voice Vocaloids. There has since been numerous installments such as additional voice banks dubbed 'Append' as well as an upcoming upgrade to the VOCALOID3engine which is said to include an English vocal release. They are the second set of vocals for Crypton's VOCALOID Character Vocal Series.

A song involving the magical boy Magical☆Kitty Len Len, and the perverted people surrounding him.

And Magical☆Nuko Len Len is featured on Owata-P's album The End \(^o^)/. This song is also included on the EXIT TUNEScompilation album Vocaloconnection.