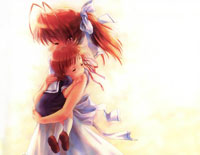 Free Magome Togoshi piano sheet music is provided for you. So if you like it, just download it here. Enjoy It!

Magome Togoshi
is used as the background music of Clannad.

Clannad (クラナド Kuranado) is a Japanese visual novel developed by Key and released on April 28, 2004 for Windows PCs. While both of Key's first two previous works, Kanon and Air, had been released first as adult games and then censored for the younger market, Clannad was released with a rating for all ages. It was later ported to the PlayStation 2, PlayStation Portable, Xbox 360, PlayStation 3 and PlayStation Vita consoles. The story follows the life of Tomoya Okazaki, a high school delinquent who meets many people in his last year at school, including five girls, and helps resolve their individual problems.

The gameplay of Clannad follows a branching plot line which offers pre-determined scenarios with courses of interaction, and focuses on the appeal of the five female main characters by the player character. The game was ranked as the best-selling PC game sold in Japan for the time of its release, and charted in the national top 50 several more times afterwards. Key went on to produce an adult spin-off titled Tomoyo After: It's a Wonderful Life in November 2005, which expanded on the scenario of Tomoyo Sakagami, one of the five heroines from Clannad.

And Magome Togoshi is a song by Shinji Orito who is a Japanese musical composer originally from Hyōgo, Japanworking for the software company Key. Before forming Key, Orito worked for another software company named Leaf where he contributed to four games.