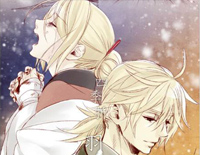 Free Shikiori no Hane piano sheet music is provided for you. So if you like it, just download it here. Enjoy It!

Shikiori no Hane
is a song performed by Kagamine Rin & Len. Kagamine Rin & Len (鏡音リン ・レン) are Japanese VOCALOIDs developed and distributed by Crypton Future Media, Inc., and were initially released in December 2007 for theVOCALOID2 engine. They are part of the Character Vocal Seriesand are both Character Voice Vocaloids. There has since been numerous installments such as additional voice banks dubbed 'Append' as well as an upcoming upgrade to the VOCALOID3engine which is said to include an English vocal release. They are the second set of vocals for Crypton's VOCALOID Character Vocal Series.

Based around the Japanese folktale of the crane maiden or crane wife, Shikiori no Hane tells a story about a crane (Rin) who was rescued by a man (Len) when hunting. Grateful, the crane visited him in her human form and the two fell in love. One day the man became sick, and because they were unable to afford medicine, the crane began to weave cloth with her own feathers and sell them for money.

This song is featured on the album If the World. This song has reached the Hall of Fame.