Yakusoku no Kizuna-Beyond the Boundary OST 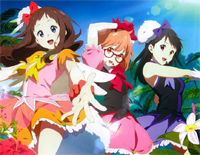 Free Yakusoku no Kizuna piano sheet music is provided for you. So if you like it, just download it here. Enjoy It!

Yakusoku no Kizuna
(約束の絆, "Bonds of Promises") is used as an insert song of anime television series Beyond the Boundary. Beyond the Boundary (境界の彼方 Kyōkai no Kanata) is a Japanese light novel series written by Nagomu Torii, with illustrations by Tomoyo Kamoi. The work won an honorable mention in the Kyoto Animation Award competition in 2011. Kyoto Animation has published three volumes since June 2012. An anime television series adaptation, produced by Kyoto Animation, aired in Japan between October and December 2013. An original video animation episode will be released in July 2014.