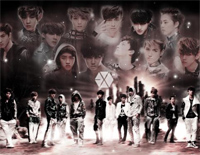 Free Lucky piano sheet music is provided for you. So if you like it, just download it here. Enjoy It!

Lucky
is a K-Pop/Mandopop song performed by the South Korean-Chinese artist idol group Exo. Available in both Korean and Mandarin Chinese, the song was included in the repackaged version of their first studio album XOXO which was digitally released on August 5, 2013 under the record label of S.M. Entertainment.

Lucky
, according to the album description on Korean music site Naver Music, belongs to the pop and R&B music genres and has a 'rhythmic melody'. The piece was composed and arranged by the music producer E.One. This was the producer's first collaboration with any artist under the umbrella of SM Town although he had previously worked with other notable names in music industry such as ZE:A, G.NA, Boyfriend and My Name. "Lucky" was described as a love song, in which the boy expresses the pure thoughts in his mind about feeling lucky everyday for being with his lover.

Meanwhile, we also offer Moonlight-EXO sheet music for you to download