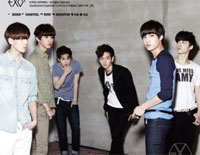 Free Machine piano sheet music is provided for you. So if you like it, just download it here. Enjoy It!

Machine
is a R&B song of electronic-dubstep genre performed by South Korean-Chinese boy bands Exo-K and Exo-M. Available in both Korean and Mandarin, the song was included in their first min-album Mama which was digitally released on April 9, 2012 under the record label of S.M. Entertainment.

Machine
gained mixed to generally favorable reviews. Popular K-pop news site Allkpop noted that the song had the same vibe as the 'advanced formula' used for Shinee's recent hits like "Lucifer" and "Sherlock". The site also pointed out that the "machine concept [fitted] alright with Exo’s sci-fi looking visuals". Another K-pop news site Seoulbeats.com remarked that the first few seconds of "Machine" were a bit confusing and that the track didn't offer much to the 'epic' debut album. The critic McRoth praised the song calling it "pop music at its best".

Meanwhile, we also offer EXO's another song Miracles in December sheet music for you to download