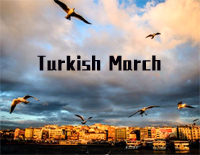 Free Turkish March piano sheet music is provided for you. So if you like it, just download it here. Enjoy It!

Turkish March
, also known as Alla Turca, is often heard on its own and is one of Mozart's best-known piano pieces. Mozart himself titled the rondo "Alla Turca". It imitates the sound of Turkish Janissary bands, the music of which was much in vogue at that time. Various other works of the time imitate this Turkish style, including Mozart's own opera Die Entführung aus dem Serail. In Mozart's time, the last movement was sometimes performed on pianos built with a "Turkish stop", allowing it to be embellished with extra percussion effects.