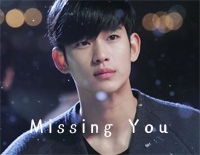 Free Missing You piano sheet music is provided for you. So if you like it, just download it here. Enjoy It!

Missing You
is used as an original soundtrack of South Korean television series My Love from the Star.

My Love from the Star is about an alien who landed on Earth in the Joseon Dynasty and, 400 years later, falls in love with a top actress in the modern era. It aired on SBS from 18 December 2013 to 27 February 2014 on Wednesdays and Thursdays at 21:55 for 21 episodes, as the production company decided to extend the originally 20-episode series with one episode, due to demand from viewers.

The fantasy romance stars Kim Soo-hyun and Jun Ji-hyun (also known as Gianna Jun, in her small screen comeback after 14 years), who previously worked together in the blockbuster heist film The Thieves.

Meanwhile, we also offer My Destiny-My Love from the Star ED sheet music for you to download