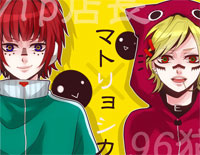 Free Matryoshka piano sheet music is provided for you. So if you like it, just download it here. Enjoy It!

Matryoshka
originally is a song by Hatsune Miku and GUMI, but this is for Marasy.

Made in celebration of Miku's birthday, this is a rather chaotic and addictive alternative rock composition which reached over a million hits with incredible speed (less than 32 days, a feat that most other well-known songs take from a few months to a year to achieve). It is one of the most popular VOCALOID songs ever released.

Most of the lyrics are nonsensically vague or ridiculous, with a slight hint of pain or sadness, giving the overall song a crazy and psychotic feeling. Because of this, the lyrics have been interpreted in various ways.

A Matryoshka is a Russian nesting doll. The intermissions are descriptions in many different languages from the Wikipedia article for them. The first is taken exclusively from the Japanese one, but the second combines information from other languages.

Besides, we offer First Storm  to you!