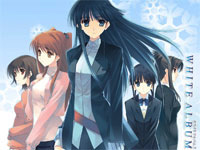 Free Sayonara no Koto piano sheet music is provided for you. So if you like it, just download it here. Enjoy It!

Sayonara no Koto
is the third ending theme of White Album 2. White Album 2 (ホワイトアルバム2 Howaito Arubamu 2) is a duology of Japanese adult visual novels developed by the visual novel company Leaf for the Microsoft Windows PC, and is the sequel to Leaf's earlier visual novel, White Album. The first part of the series, named White Album 2: Introductory Chapter, was released on March 26, 2010. The second part in the series is named White Album 2: Closing Chapter and was released on December 22, 2011. An all-ages PlayStation 3 version combining both chapters published by Aquaplus was released in 2012 and ported for PlayStation Vita in 2013. The gameplay of White Album 2 follows a linear plot line which offers pre-determined scenarios with courses of interaction, and focuses on the appeal of the female main characters. A television series anime adaptation aired in Japan between October and December 2013.

And the anime series uses "Todokanai Koi '13" (届かない恋 '13) as the opening theme and "Closing '13" and "Sayonara no Koto" (さよならのこと) as ending themes, all three performed by Rena Ueahara.