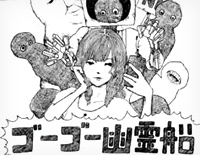 Free Go Go Yūreisen piano sheet music is provided for you. So if you like it, just download it here. Enjoy It!

Go Go Yūreisen
is a song by Kenshi Yonezu. Kenshi Yonezu (米津玄師 Yonezu Kenshi, born March 10, 1991), is a Japanese musician, who began releasing Vocaloid music under the stage name Hachi (ハチ) in 2009. In 2012 he debuted under his real name, releasing music with his own voice.

And Go Go Yūreisen is included in his studio album Diorama which was released on May 16, 2013. The album was one of the top independent releases in Japan in 2012, and was one of the winners of the 5th CD Shop Awards.