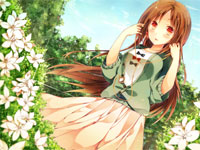 Free Sakura no Ame piano sheet music is provided for you. So if you like it, just download it here. Enjoy It!

Sakura no Ame
is a song by Hatsune Miku that is a Japanese VOCALOID developed and distributed by Crypton Future Media, Inc., and was initially released in August 2007 for the VOCALOID2 engine.

This song was uploaded on February 22, 2008. It was reoccurring in the Vocaloid Weekly rankings, but eventually lost its popularity. It became popular again when the band "absorb" preformed it live at a high school graduation, reaching number 1 on the weekly rankings. It then became a popular graduation song across Japan.

A novelized version of the song was first published on February 2012 and it was announced that the novel "Sakura no Ame" will have a sequel as well.

And Sakura no Ame is featured in the EXIT TUNES compilation album Vocalodream.