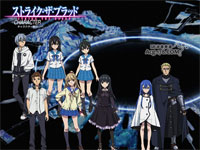 Free Signal piano sheet music is provided for you. So if you like it, just download it here. Enjoy It!

Signal is the second ending theme of Strike the Blood. Strike the Blood (ストライク・ザ・ブラッド Sutoraiku za Buraddo), also known in short form as SutoBura (ストブラ), is a Japanese light novel series by Gakuto Mikumo with illustrations by Manyako. A manga adaptation began serialization in August 2012 in ASCII Media Works's Dengeki Daioh. A 24-episode television anime adaptation by Silver Link and Connect aired between October 4, 2013 and March 28, 2014 in Japan.