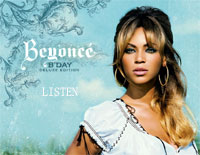 Free Listen piano sheet music is provided for you. So if you like it, just download it here. Enjoy It!

Listen
is a song recorded by American singer Beyoncé Knowles. The song was written by Henry Krieger, Scott Cutler, Anne Preven, and Knowles, and produced by The Underdogs Matt Sullivan and Randy Spendlove for the soundtrack album Dreamgirls: Music from the Motion Picture to the 2006 musical film Dreamgirls, in which Knowles' character Deena Jones sings the song to assert independence over her controlling husband. Columbia Records released "Listen" as the lead single from soundtrack album on December 5, 2006. It additionally appeared as a hidden track on international editions, and on the deluxe edition of Knowles' second solo studio album, B'Day. The Spanish version of the song, "Oye", was released on the EP, Irreemplazable, and the Spanish deluxe edition of B'Day.

Listen
is a soul-R&B song; its lyrics make reference to tenacity, love, the refusal to defer dreams and finally rise towards fame. Its instrumentation includes bass, drums, guitars, keyboards, percussion, and violins, among others. The song was a critical success. Contemporary music critics complimented the strong and emotional vocals of Knowles, and added that the lyrics perfectly elaborate on Deena Jones's life. "Listen" won Best Original Song at the 2007 Critics' Choice Awards. It was nominated in the same category at the 2006 International Press Academy Satellite Award, at the 2007 Golden Globe Awards, and at the 2007 Academy Awards.

Listen peaked at number 61 on the US Billboard Hot 100 chart and generally peaked inside the top 20 positions in European countries. It fared better in the United Kingdom where it reached number eight thanks to a live duet performance of Knowles and Alexandra Burke at The X Factor, where Burke emerged as the winner after singing "Listen" during the finale. The song was also covered by Charice and Melanie Amaro during the finale of the first season of the The X Factor in the US, where she emerged as the winner. Two accompanying music videos were filmed for "Listen"; the performance version was directed by Diane Martel, and the second one, being Vogue Shoot Version, was directed by Matthew Rolston. "Listen" was also a part of her set list on The Beyoncé Experience (2007) and I Am... Tour (2009–10).

The Lyrics of Listen:

Oh,
The time has come
For my dreams to be heard
They will not be pushed aside and turned
Into your own
All cause you won't
Listen...

[Chorus:]
Listen,
I am alone at a crossroads
I'm not at home in my own home
And I've tried and tried
To say what's on my mind
You should have known
Oh,
Now I'm done believing you
You don't know what I'm feeling
I'm more than what you made of me
I followed the voice you gave to me
But now I gotta find my own.

Oh I'm screaming out, and my dreams will be heard
They will not be pushed aside or worked
Into your own
All cause you won't
Listen...

...listen to the song here in my heart
A melody I've started but I will complete
Oh,
Now I'm done believing you
You don't know what I'm feeling
I'm more than what you've made of me
I followed the voice you think you gave to me
But now I gotta find my own,
My own.