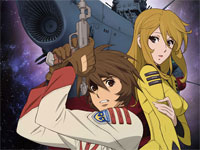 Free Space Battleship Yamato piano sheet music is provided for you. So if you like it, just download it here. Enjoy It!

Space Battleship Yamato
is the opening theme for a series with the same name. Space Battleship Yamato (宇宙戦艦ヤマト Uchū Senkan Yamato, also called Cosmoship Yamato) is a Japanese science fictionanime series featuring an eponymous spacecraft. It is also known to English-speaking audiences as Space Cruiser Yamato; an English-dubbed and heavily edited version of the series was broadcast on North American and Australian television as Star Blazers. The first two seasons ("Quest for Iscandar" and "The Comet Empire") of this version were broadcast in Greece in 1981-82 as Διαστημόπλοιο Αργώ ("Spaceship Argo"). An Italian-language version was also broadcast under the name Star Blazers in Italy, and a Portuguese-language version was successfully shown in Brazil under the title Patrulha Estelar ("Star Patrol") and Viaje a la Ultima Galaxia ("Voyage to the Final Galaxy") orAstronave Intrepido ("Starship Intrepid") in Spain and Latin America.

And Space Battleship Yamato is a song by Isao Sasaki, a Japanese voice actor, actor, and vocalist.