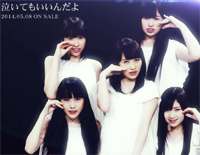 Free Naite mo Iin Da yo piano sheet music is provided for you. So if you like it, just download it here.

Naite mo Iin Da yo
(泣いてもいいんだよ, "It's Okay to Cry") is a song by Japanese pop-group Momoiro Clover Z, serving as their 11th single. It was released on May 8, 2014.

Naite mo Iin Da yo
will be released as a standard CD and a limited edition CD and DVD package. It was first previewed during the band's performances at their March 15 and 16, 2014, concerts at the National Olympic Stadium. At the time, only the title track, the theme song for the film Akumu-chan: The Movie, and only one of the B-sides "Dōdō Heiwa Sengen", theme song for the new The Great Shu Ra Ra Boom film, were revealed, with a third then unnamed track to be included on the standard edition only. The song was ultimately revealed to be "My Dear Fellow", and it was played at New York's Yankee Stadium for Masahiro Tanaka's warmup on April 10, 2014, and was specially made for him when he joined the New York Yankees.