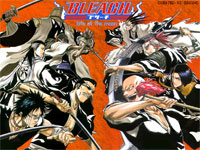 Free Velonica piano sheet music is provided for you. So if you like it, just download it here. Enjoy It!

Velonica was the opening theme music used for episodes 190–214 of the anime Bleach. Bleach (ブリーチ Burīchi) is a Japanese anime series based on the manga of the same name by Tite Kubo. The anime ran for a total of 366 episodes including 111 episodes of original material not based on the manga. Bleach was produced by Studio Pierrot and directed by Noriyuki Abe. Bleach's Japanese and English voice actors include some of the most credited and well known voice actors, including Johnny Yong Bosch. The music was composed by Shirō Sagisu, who also composed the music forNeon Genesis Evangelion. A total of fifteen opening themes and thirty ending themes are used throughout the series; featuring a diverse group of Japanese artists.