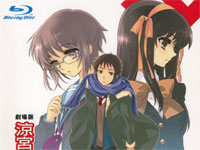 Free Yasashii Bōkyaku piano sheet music is provided for you. So if you like it, just download it here. Enjoy It!

And Yasashii Bōkyaku was used as the ending theme to The Disappearance of Haruhi Suzumiya, in which Chihara again reprises her role as Yuki Nagato. It won the Best Singing Award at the fifth annual Seiyu Awards held in 2011 in Tokyo for Chihara's performance. A promotional video for the song was released January 27, 2010 on Lantis' official YouTube channel.

The Disappearance of Haruhi Suzumiya (涼宮ハルヒの消失 Suzumiya Haruhi no Shōshitsu), or The Vanishment of Haruhi Suzumiya, is a 2010 Japanese animated film based on the fourth Haruhi Suzumiya light novel of the same name written by Nagaru Tanigawa. It is produced by Kyoto Animation and directed by Tatsuya Ishihara and Yasuhiro Takemoto. It was released in Japanese theaters on February 6, 2010 and on DVD and Blu-ray Disc on December 18, 2010. The film has been licensed by Bandai Entertainment in North America and Manga Entertainment in the UK.