Chihiro no Waltz-Spirited Away OST 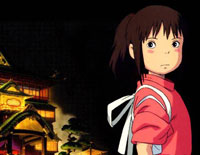 Chihiro no Waltz-Spirited Away OST Introduction

Free Chihiro no Waltz piano sheet music is provided for you. So if you like it, just download it here. Enjoy It!

Chihiro no Waltz
(千尋のワルツ Chihiro no Warutsu, Chihiro's Waltz) is an original soundtrack for Spirited Away. Spirited Away (千と千尋の神隠し Sen to Chihiro no Kamikakushi, "Sen and Chihiro's Spiriting Away") is a 2001 Japanese animated fantasy film written and directed by Hayao Miyazaki and produced by Studio Ghibli. The film stars Rumi Hiiragi,Miyu Irino, Mari Natsuki, Takeshi Naito, Yasuko Sawaguchi, Tsunehiko Kamijō, Takehiko Ono and Bunta Sugawara, and tells the story of Chihiro Ogino (Hiiragi), a sullen ten-year-old girl who, while moving to a new neighborhood, enters the spirit world. After her parents are transformed into pigs by the witch Yubaba (Natsuki), Chihiro takes a job working in Yubaba's bathhouse to find a way to free herself and her parents and return to the human world.

Chihiro no Waltz
is a piece of music composed by Joe Hisaishi who is a composer and musical director known for over 100 film scores and solo albums dating back to 1981.