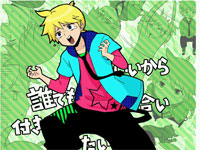 Free Dare Demo Ii Kara Tsukiaitai piano sheet music is provided for you. So if you like it, just download it here. Enjoy It!

Dare Demo Ii Kara Tsukiaitai is a song by Kagamine Len. Kagamine Len (鏡音レン) are Japanese VOCALOIDs developed and distributed by Crypton Future Media, Inc., and were initially released in December 2007 for theVOCALOID2 engine. They are part of the Character Vocal Series and are both Character Voice Vocaloids.

This is Takkyuu Shounen's most viewed VOCALOID song, a short song about Len being desperate to date anybody.

And Dare Demo Ii Kara Tsukiaitai is featured in the EXIT TUNES compilation album Vocalosensation and has entered the Hall of Fame.