Ponyo On The Cliff-Gake no Ue no Ponyo 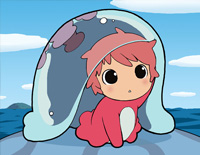 Ponyo On The Cliff-Gake no Ue no Ponyo Related Videos

Ponyo On The Cliff-Gake no Ue no Ponyo Introduction

"Gake no Ue no Ponyo" (崖の上のポニョ Ponyo on the Cliff) is the eponymous theme song to the Studio Ghibli film Ponyo, released on December 5, 2007 (though gaining popularity with the release of the film in August 2008). It was performed by folk group Fujioka Fujimaki and then eight-year-old Nozomi Ōhashi.


Ponyo on the Cliff was written in collaboration between veteran Ghibli composer Joe Hisaishi, with lyrics by the film's supervisor Katsuya Kondō and director Hayao Miyazaki. When Hisaishi originally saw the storyboards for the film, he immediately thought up the melody for the song. However, as he believed it was too simple a melody, he did not mention it for two to three months. He eventually showed the song to Miyazaki and producer Toshio Suzuki as he could not get it out of his head. They both believed such a simple song was fitting for the film.