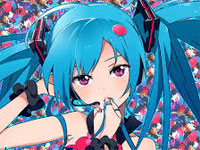 Free Tell Your World piano sheet music is provided for you. So if you like it, just download it here. Enjoy It!

Tell Your World
is an electropop song by kz, sung by Hatsune Miku. It is one of the most popular Vocaloid songs of all time. When kz was asked to create a song for a Japanese Google Chrome commercial, he was provided with the video footage and drew his inspiration for the song from it. kz stated that "I wrote the song to express the feelings that I get when using the internet, the feelings of happiness and excitement". The commercial was uploaded onto YouTube on December 14, 2011. Since then, the ad gained 4 million views, more than other Japanese Google Chrome ads featuring popular singers such as Lady Gaga and Justin Bieber.

livetune later uploaded the full music video for the song onto their official YouTube channel on March 12, 2012. Colorful, busy, and featuring Lat's Miku model, the video has become even more popular than the ad, with over 9,000,000 views.

Tell Your World
was released as a single (Tell Your World), and is featured along with two remixes on the Tell Your World EP. kz's albums Re:Dial and Re:Upload include both the official English version of the song (which was release as a single as well) and the original Japanese version. "Tell Your World" is also featured on the compilation albums Hatsune Miku 5th Anniversary Best ～memories～ and 初音ミク-Project DIVA-F Complete Collection.