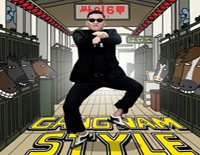 "Gangnam Style" is a K-pop single by South Korean musician PSY. The song was released on July 15, 2012, as the lead single of his sixth studio album PSY 6 (Six Rules), Part 1. "Gangnam Style" debuted at number one on the Gaon Chart, the national record chart of South Korea. As of December 2, 2012 (2012 -12-02)[update], the music video has been viewed over 874 million times on YouTube, and is the site's most watched video after surpassing Justin Bieber's single "Baby."

The phrase "Gangnam Style" is a Korean neologism that refers to a lifestyle associated with the Gangnam District of Seoul. The song and its accompanying music video went viral in August 2012 and have influenced popular culture since then. "Gangnam Style" received mixed to positive reviews, with praise going to its catchy beat and PSY's amusing dance moves in the music video and during live performances in various locations such as Madison Square Garden, The Today Show, The Ellen DeGeneres Show, and Samsung commercials. On September 20, 2012, "Gangnam Style" was recognized by Guinness World Records as the most "liked" video in YouTube history. It subsequently won Best Video at the MTV Europe Music Awards held later that year.