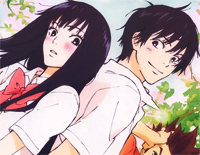 Free Kataomoi piano sheet music is provided for you. So if you like it, just download it here. Enjoy It!

Kataomoi
servers as the ending theme for the shōjo anime series Kimi ni Todoke. Kimi ni Todoke: From Me to You (君に届け, lit. Reaching You) is a romance shōjo manga by Karuho Shiina. It has been published by Shueisha in Bessatsu Margaret since 2005 and collected in 21 tankōbon volumes as of March 2014. In 2008, it won the Best Shōjo Manga award in the 32nd Annual Kodansha Manga Award. The series was also nominated for the first Manga Taisho awards in 2008. Two anime adaptations of Kimi ni Todoke were aired in Japan, produced by Production I.G. The second season of the anime was announced in Betsuma Magazine, began airing in Japan on January 4, 2011 and lasted for 12 episodes. A live action film adaptation was released in 2010 starring Mikako Tabe and Haruma Miura.

And Kataomoi (片思い) is by Chara who is a Japanese singer-songwriter, actress and video jockey.