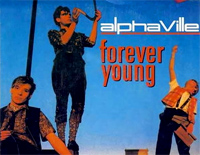 Free Forever Young piano sheet music is provided for you. So if you like it, just download it here. Enjoy It!

Forever Young is the title track from German rock/synthpop group Alphaville's 1984 debut album of the same name. The single was a strong hit in Scandinavia and in the European-German speaking countries in the same year.

Though it was not the group's highest-charting European hit and failed to reach the American Top 40 despite three separate U.S. single releases, "Forever Young" has subsequently been covered by numerous artists.

Forever Young has become something of a pop culture standard. It has been performed by numerous musical groups and in different versions and has appeared in television series, movies, and advertisements. The song plays during scenes in the television series Passions, It's Always Sunny in Philadelphia (episode 103: "Underage Drinking: A National Concern"), the North American version of Queer as Folk (season 1, episode 18), One Tree Hill (season 4, episode 16), 30 Rock (season 4, episode 10), Greek (Cover version by the Youth Group in the Series finale) and Big Love. It also plays in the movie Listen to Me and during the school dance scene of the 2004 film Napoleon Dynamite. In 2006 and 2007, the song was used in advertisements for the Scandinavian banks SEB in Estonia and Sweden, and Nordea in Denmark. It also appeared in prom-themed advertisements for Saturn Ion automobiles. In Argentina, it was used in advertisements for Consolidar AFJP, a pension retirement fund. It was also sung by one of the characters in the "Soulmates" episode (2011) of the American television program, Parks and Recreation.

The Lyrics of Forever Young:

Let's dance in style, let's dance for a while
Heaven can wait, we're only watching the skies
Hoping for the best but expecting the worst
Are you gonna drop the bomb or not?

Let us die young or let us live forever
We don't have the power but we never say never
Sitting in a sandpit, life is a short trip
The music's for the sad men

Can you imagine when this race is won
Turn our golden faces into the sun
Praising our leaders, we're getting in tune
The music's played by the, the mad men

Some are like water, some are like the heat
Some are a melody and some are the beat
Sooner or later, they all will be gone
Why don't they stay young?

Forever young, I want to be forever young
Do you really want to live forever?