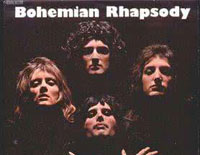 Free Bohemian Rhapsody piano sheet music is provided for you. So if you like it, just download it here. Enjoy It!

Bohemian Rhapsody
is a song by the British rock band Queen. It was written by Freddie Mercury for the band's 1975 albumA Night at the Opera. The song has no chorus, instead consisting of several sections: a ballad segment ending with a guitar solo, an operatic passage, and a hard rock section. At the time, it was the most expensive single ever made and it remains one of the most elaborate recordings in popular music history.

When it was released as a single, "Bohemian Rhapsody" became a commercial success, staying at the top of the UK Singles Chart for nine weeks and selling more than a million copies by the end of January 1976. It reached number one again in 1991 for five weeks following Mercury's death, eventually becoming the UK's third best-selling single of all time. It topped the charts in several other markets as well, including Canada, Australia, New Zealand, Ireland and The Netherlands, later becoming one of the best-selling singles of all time. In the United States the song originally peaked at number nine in 1976; however, it returned to the chart at number two in 1992 following its appearance in the film Wayne's World which revived its American popularity.

Although critical reaction was initially mixed, "Bohemian Rhapsody" remains one of Queen's most popular songs. The single was accompanied by a promotional video, which many scholars consider ground-breaking. In 2004, "Bohemian Rhapsody" was inducted into the Grammy Hall of Fame. In 2012, the song topped the list on an ITV nationwide poll in the UK to find "The Nation's Favourite Number One" over 60 years of music.

The Lyrics of Bohemian Rhapsody: