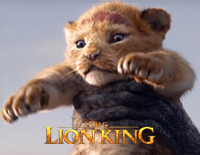 Free Circle of Life piano sheet music is provided for you. So if you like it, just download it here. Enjoy It!

Circle of Life
is a song from Disney's 1994 animated film The Lion King. Composed by Elton John, with lyrics by Tim Rice, the song was performed by Carmen Twillie (female vocals) and Lebo M (opening Zulu vocals) as the film's opening song. Elton John sang a pop version of the song with the London Community Gospel Choir, which was included in the film's soundtrack and made into a music video. "Circle of Life" was nominated for the Academy Award for Best Song in 1994, along with two other songs from The Lion King: "Hakuna Matata" and "Can You Feel the Love Tonight" which won the award.

The song reached #11 in the UK and #18 in the US, and is featured frequently in attractions based on The Lion King, such as Disney theme parks and parades. Michael Crawford sang it as part of a medley for The Disney Album in 2001.

Meanwhile, we also offer The Lion King OST-Can You Feel the Love Tonight sheet music for you to download

The Lyrics of Circle of Life:

From the day we arrive on the planet
And blinking, step into the sun
There's more to see than can ever be seen
More to do than can ever be done
There's far too much to take in here
More to find than can ever be found
But the sun rolling high
Through the sapphire sky
Keeps great and small on the endless round